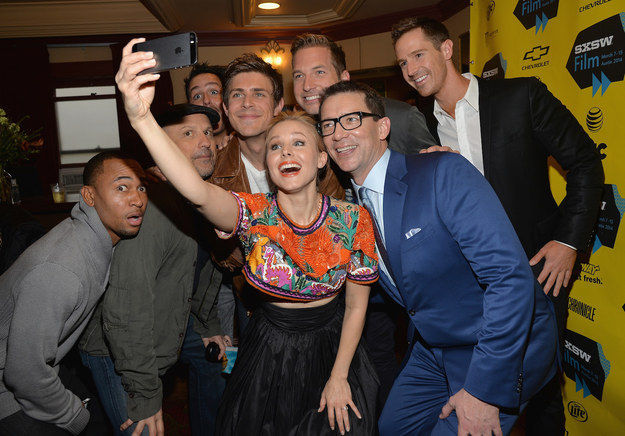 The following article and gifs are from The Whole “Veronica Mars” Gang Is Coming Back For A New Web Series by Jarett Wieselman, Buzzfeed.

“When Play It Again, Dick — a web series revolving around Ryan Hansen’s fan favoriteVeronica Mars character, Dick Casablancas — was announced in January 2014, creator Rob Thomas described the project like this: “The web series will have more in common with Party Down tonally, but it will be about Ryan Hansen, or at least a version of Ryan Hansen, deciding to capitalize on the current Veronica Mars heat to get his own series on the air. He’ll try to pull his actor pals into the venture with varying degrees of success.”

In the subsequent seven months, Thomas has been silent on the series. But with filming on the eight-episode series recently completed, BuzzFeed can now reveal the actors who will join Ryan Hansen — who plays Dick Casablancas and a fictionalized version of himself — in the super-meta series.

The Rob Thomas-penned web series revolves around a fictional Veronica Mars spin-off that Hansen has “written” as a star vehicle for himself titled Play It Again, Dick. Like almost everyone involved, Bell plays a slightly skewed version of herself who has — begrudgingly — agreed to reprise her role as the titular sleuth for Hansen’s spin-off.

Lowell is one of the few alums returning to play a single character.

Likewise, Marino will only play himself and not sleazy private eye Vinnie Van Lowe.

She’s only appearing in the show-within-a-show as Madison, rather than as a fictionalized version of herself. (Yes, this is getting super complicated.)

As is the case with Noret, Thornhill will play the prickly Celeste Kane in the show-within-a-show.

And there are two new faces as well!

The series will also feature Wesley Chan, Philip Wang, and Chris Dinh, as well as Mark Pedowitz, president of The CW, and Thom Sherman, The CW’s head of development.

This is a lot to process.

Play It Again, Dick premieres the week of Sept. 15 on CW Seed.”